Mission of the Association of American Indian Nurses (AAIN-NJ2):

To foster professional development of nurses of Indian origin or heritage through higher education, knowledge, and skills, as well as to create opportunities to network with other professional organizations and be actively involved in local and national events

The American Association of Indian Nurses (AAIN-NJ2) is a not-for- profit organization registered in the state of New Jersey and affiliated with the National Association of Indian Nurses of America (NAINA). It was begun in 2006 by a group of immigrant nurses who were recruited by Josefina Barredo, Vice President, International Recruitment, St. Barnabas Health Care System. After meeting with and sharing a meal with the nurses, Ms. Barredo discussed the importance of founding a minority association for Indian nurses. To kick of the event, a picnic was organized at Merrill Park, Colonia on August 26th, 2006.The Executive Board was elected: Founding President, Lydia Albuquerque; Secretary, Thangamani Aravindan; Joint Secretary,Esther Pimplekar; Treasurer, Girija Thaikandy; and Joint Treasurer, Nalini Imbaraj. To increase membership and visibility, the first executive meeting of the association was held at Newark Beth Israel Medical Center. The executive committee nominated Varsha Singh as the Events and Publicity Chair and Sijo Kallarakkal as the Chair for IT and Technical Support.The second executive meeting was held at Clara Mass Medical Center, Belleville.

The Executive Board learned about the National Association of Indian Nurses of America’s inaugural ceremony during an interview for an article “Putting the Pieces Together” by Lorraine Steefel, Senior Staff Writer, for Nurse.Com (formerly Nursing Spectrum), who provided them with contact information.In 2007, Mary Ellen Clyne, CNO, Clara Mass Medical Center, sponsored the founding president and secretary to attend the inaugural event of the National Association of Indian Nurses of America in Houston Texas. This gave the executive committee members an opportunity to connect with national leaders.Also in 2007, the association was incorporated in the state of New Jersey and the bylaws were established.

Nancy Holecek, Senior Vice President, St. Barnabas Health Care System, invited the Founding President Lydia Albuquerque to present the Road Map of AAIN-NJ2 to the system-wide senior nursing leadership at the corporate office in Short Hills, NJ. This helped in increasing membership and visibility of the organization. On June 13, 2009 with the sponsorship of the Johnson and Johnson Campaign for Nursing’s Future, the inaugural session and first conference was held. Since then, the activities of the association have grown.

VALUES: We believe in: 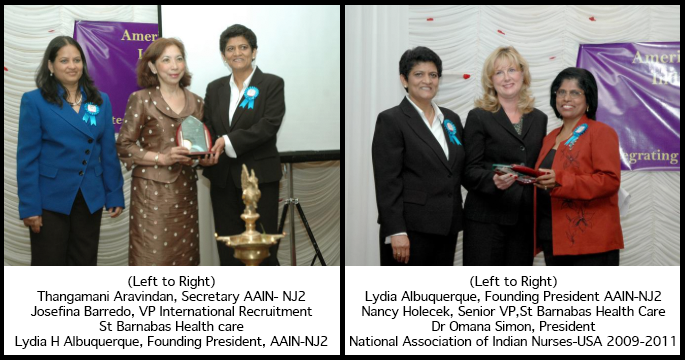